A History of Casinos 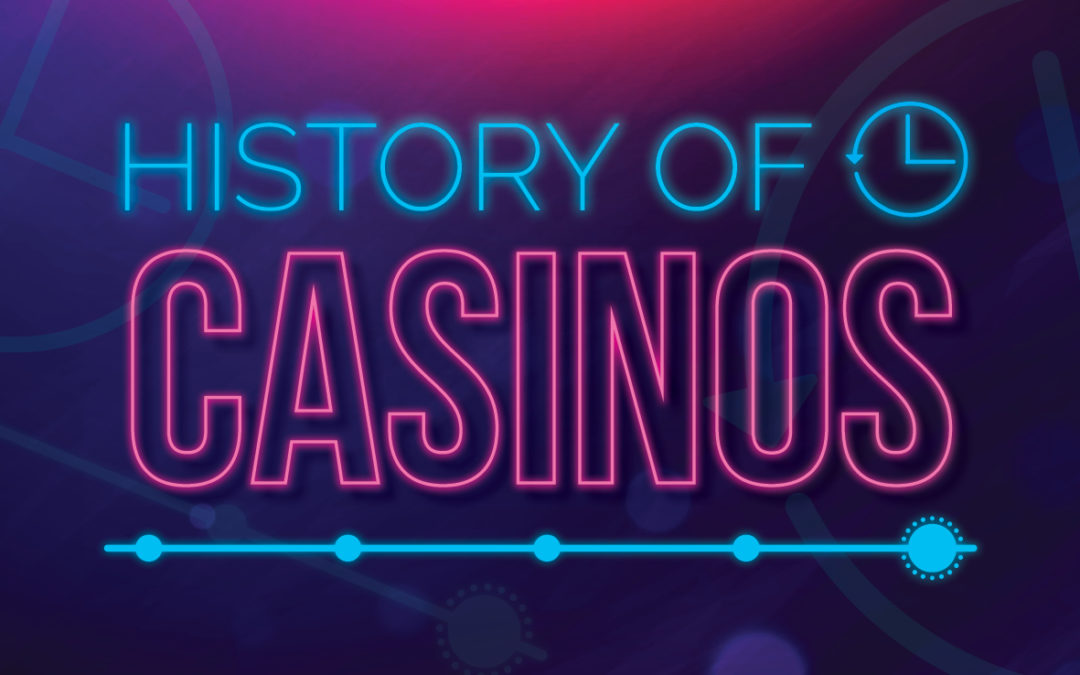 Some form of gambling has been around since the dawn of recorded time. The civilisations of ancient China, Egypt and Greece all enjoyed games of chance, betting and lotteries. Ancient Romans invented the gambling chip so if they were caught gaming illegally they could claim they weren’t playing for real money.

Baccarat, one of the most sophisticated of all games of chance, has been around since the 1400s and Blackjack dates back to the 1600s and probably long before.

But what about the brick-and-mortar casino? Now that we can all play whenever and wherever we like, it’s incredible to think that the first casino came into being in 1638 when the town council of Venice opened the Casino di Venezia.

From Il Ridotto to Las Vegas

Known as Il Ridotto, the casino was only intended to operate during the famous carnival and was eventually forced to close by the Church. But not before word to spread to fashionable Paris where the first casino opened in 1765 featuring a new game – the roulette wheel.

From the Italian word meaning ‘little house,’ every resort had to have its own casino and the 19th century saw a boom in building from Baden Baden in Germany to glamorous Monte Carlo where gambling faced no restrictions whatsoever. While the Europeans built gilded palaces to serve the gambling elite, the American scene was far more rough and ready with gaming confined to the saloon and the Mississippi riverboats. But, it was about to all change.

The rise of ‘The Strip’

The Nevada desert might seem an unlikely place to have become the global hub of gambling. Migrant railroad workers connecting Vegas to the major cities of the West created the first gambling community and were quickly banned for their bad behaviour. But there was no stopping the happy gamblers who just kept on playing, even when gambling was outlawed in 1910. When Prohibition was introduced 10 years later, it was a combustible mix and illegal gaming and drinking dens were rife.

Eventually, the state relented and Nevada legalised gambling in 1931. But not before organised crime had earned Las Vegas the nickname Sin City. The Golden Gate was the first legalised casino in Vegas and then came the El Rancho Vegas, an all-American resort with horse riding, swimming pools and a fully equipped casino including craps, roulette, blackjack and 70 slot machines.

The Strip was about to explode.

Vegas really took off in the years after World War II, when Bugsy Siegel opened the first Mafia-owned casino, The Pink Flamingo. Unfortunately, Bugsy ran foul of the other mob bosses and lost his head, literally.

After Siegel was assassinated in 1947, gangster money continued to flood in and provided funds for The Sands, The New Frontier and The Sahara. The entire city was controlled by the Chicago mob and the New York Mafia families – they bought money, glamour and huge stars to their casinos including Frank Sinatra and Elvis Presley.

By 1954, eight million tourists a year were enjoying the slots and poker tables of The Strip. But times were changing and Vegas was about to change with it.

The Rise of the mega-casinos

When Howard Hughes checked himself into the Desert Inn in 1966, he never checked out. Instead, he brought the hotel and set about reinventing The Strip with a $300m investment in some prime real estate. Las Vegas was no longer under the control of the mob but the big corporations who wanted a piece of this unique casino capital.

In 1989, Steve Wynn opened the first mega-resort, the Mirage Hotel and Casino. It was ‘the beginning of the end’ for the old casinos. In their place came buildings influenced by Paris, Ancient Rome and even Venice, home of that very first casino.

From bricks-and-mortar to your living room

In 1994 when Microgaming opened their 18 games online casino, no one could have foreseen that just 5 years later online gambling would be worth a cool billion dollars, with thousands of places to play packed with video poker, RNG roulette and online slots.

Now players can even enjoy a complete live casino experience from the comfort of their own home thanks to Playtech who introduced the first live casinos in 2003. Audio-visuals continue to explode in quality and emerging new technologies like AR and VR are bringing a brand-new edge to the player experience.

But at the heart of all, it lies Las Vegas, which continues to attract over 40 million gamers every year.